JDG was approached by Kingstone Press as they decided whether to sponsor the rugby league Championships ahead of the 2013 season.

After a formal consultation with us, they opted to go ahead with a sponsorship deal, and we were then drafted in to help them activate that sponsorship, primarily through our Love Rugby League channel.

Providing our insight to the sport in general, we were able to pitch several ideas to Kingstone Press and their PR agency, enabling an overall strategy to be put together, incorporating exposure through our channels.

Over 14 weeks, ‘Championing the Championships’ campaign put a weekly spotlight on each Championship and Championship 1 club to focus on their most memorable moments, look back at the clubs heroes and reward the loyal fans.

LoveRugbyLeague ran a weekly spotlight feature on the ‘Club of the Week’, giving players, coaches and Chairmen the opportunity to update us on news and ambitions. This was followed by a ‘Blast from the Past’ as clubs and fans were encouraged to share their memories and memorabilia that make the sport what it is today. Fans were also be rewarded with weekly ticket competitions. 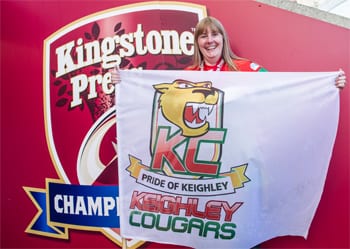 That content was delivered by JDG, and published through the Love Rugby League website and its social media channels, as well as being distributed to clubs and local press for publication via their official channels, affording Kingstone Press and the Championships maximum exposure.

JDG was also involved in the “King of the Fans” campaign to find the ultimate fan of the Championships, publicing the nomination stage through our channels, and also judging on the entries, with the winners then paraded at the Championship Grand Finals day in September.

Our knowledge provided Kingstone Press with the ideal support and foundation for their debut year in rugby league.