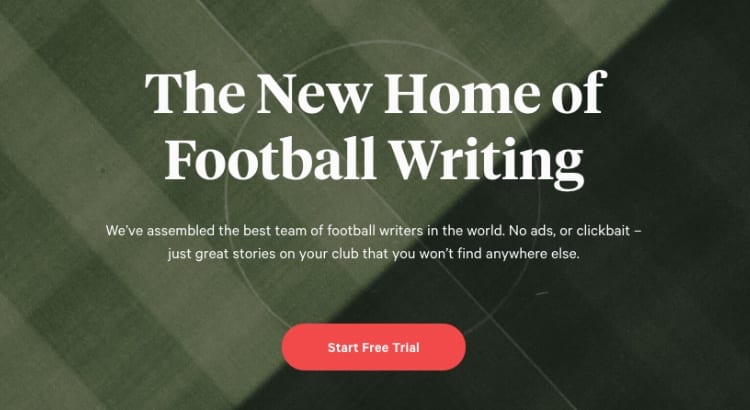 If you follow football, you can’t not have noticed the flurry of journalists joining The Athletic, an American publication that is now making a bold move in to UK football.

A range of respected local newspaper journalists with large social media followings and big contacts books have been snared by the subscription service, that promises to deliver the best football journalism and content from behind a paywall and with no adverts.

Finding an appropriate business model for online journalism has long been a challenge. My university days of the mid-late 2000s were dominated by the debate over just how newspapers could make the move online to a sustainable level.

You could say they have largely failed. Culled staff, stretched and half-empty newsrooms, click-bait content and a horrendous user experience on their websites have created an appetite for something different.

Or at least that’s what The Athletic’s moves suggest. While journalists may be fed up of writing about yet another player linked to Manchester United just to get traffic up, it remains to be seen whether the audience are happy to pay for content that may be of a greater quality.

Websites plastered with adverts, surveys and god knows what else, all to drive the revenue to sustain the journalists and otherwise that are producing content for not only the website, but for newspapers and social media channels.

While we hate the adverts, they do at least keep the content free. The problem for The Athletic, is that there will always be the free alternative – and the challenge is convincing people that the higher quality is worth paying for. Don’t forget, these local newspapers were largely producing better quality content before the needs and wants of the audience drove them to the click-bait, traffic-focused churn.

There are already some exceptions. Reach PLC’s modern look at how online journalism should look, albeit still with a poor user experience, has enjoyed some success and their football.london site has been a great success. Their FootballScotland site is another that seems to be progressing well, and is a site that has a relatively pleasant user experience in comparison.

The issue for “local” newspapers is that you’re reacting to a worldwide audience. The Manchester Evening News is a prime example of this. People who read the physical paper will be in or from Greater Manchester, and thus have more of an interest in local sport, maybe Oldham Athletic, Sale rugby or Manchester Storm ice hockey.

But the MEN’s website traffic will boom on a Manchester City or Manchester United story, because the whole world wants to read about them.

Journalists have grown fed up of catering for that clickbait audience, and that’s what has prompted this move by The Athletic, almost to save journalism from the baying needs of the transfer-gossip hungry football crowd.

Been a big Monday, really: the Athletic launches, the Totally Show goes daily and gets a website, the Football Ramble goes daily, and I’ve seen a couple of other “projects” mentioned, too. All predicated on the world’s appetite for football coverage being essentially bottomless.

The lack of coverage local newspapers now offer to secondary sports club is a disgrace. They are no longer serving their local communities, but competing with national and international websites for clicks and eyeballs for their advertisers.

The problem is the paywall. Will enough football fans be willing to part with the £10 a month (after the trial period) that it needs?

Simon Chadwick, professor of Sports Enterprise at Salford Business School, told the Irish Times: “Traditional football fans have been brought up on diet of sports pages and have shown some reluctance to embrace new forms of content when free, let alone pay for it.

“When there is much free content, it’s going to have to be something pretty special for people to be actually induced into buying it.”

The Sun and The Times both went behind a paywall and The Sun had to come back from behind it.

Things have moved on from that era, presenting The Athletic with the opportunity to give it another go.

Some really interesting points about the Athletic and the challenges of working with – and from behind – a paywall.

Big fan of the coverage they’ve published so far, and hopefully they can keep up the quality over the next 12 months. https://t.co/jqvlisMETV

The Athletic UK Managing Director Ed Malyon said: “(The current newspaper model) is broken, and nobody seems to want to do anything about it. On the surface that just means an industry in gradual, managed decline, but it has consequences that reach far beyond that.

“The volume business model naturally incentivises anything that provides web traffic. Anything being the operative word. In 2019, this means extreme opinions, unverified news reports and anything that will provoke enough of an emotional reaction in someone to share the piece through either love or hate.

“It is why there is this scramble to ‘break’ (read: repeat) news as soon as it is reported elsewhere. It’s how we ended up with news outlets simply parroting every line uttered by those who most divide us rather than daring to question it.”

Putting value back into football journalism 👏👏👏 The Athletic launches in the UK with focus on 'local' coverage of Premier League football teams – Press Gazette https://t.co/5gJe7itSlX

As a football fan first, and a journalist second, I’d like to think that The Athletic will make it impossible for fans of the game, with the disposable income, not to subscribe – much like Sky Sports.

If local newspapers continue, then it’s hard to see how them having reporters covering the same beat will tempt those on the fence to pay for content, even if it is perceived to be of a better quality than the new journalists on the local beat.

That is of course assuming that local newspapers survive.

Lots of friends involved and it's given a good kick up the arse to sports journalism wages-wise. I'm just not sure how sustainable it is. I really hope it works (and they start covering cricket and give me a job)

The Athletic’s CEO, Alex Mather, told the New York Times: “We will wait every local paper out and let them continuously bleed until we are the last ones standing. We will suck them dry of their best talent at every moment. We will make business extremely difficult for them.”

Another point to debate is that the journalists recruited by The Athletic have all built their audiences thanks to the reach of local newspapers. It will be interesting to see where the next generation, or wave, of journalists come from.

The current names have credence and an existing fan base. Without local newspapers, will the future generation be able to do that in advance?

As someone with no interest in a specific club, it will be interesting to see how their generic coverage compares. A Serie A writer would be good, though.